Korean consulting firm Chungsuk Engineering Company to prepare a Detail Project Report (DPR) for the construction of Bardibas-Birgunj section of Mechi-Mahakali Electrical Railway system and negotiations with the same firm are underway for the feasibility study of the proposed metro train service in the Kathmandu valley.
The committee is engaged in final negotiations with the same Korean firm (Chungsuk Engineering Company) to finalize the contract agreement after evaluating its technical and financial proposals for the feasibility study of metro railway – a Mass Rapid Transit (underground and elevated railway) system for the capital.
The government pushed for a Mass Rapid Transit system in the valley about two years ago in a bid to manage the worsening traffic conditions in the capital due to unchecked rise in the number of vehicles and poor transport infrastructure. An estimated Rs 80 million is needed to complete the feasibility of the Metro railway line.
Chungsuk Engineering Company of Korea, RITES Limited (India), Systra FA of France and TEAM Consulting Engineering and Management of Thailand were short-listed and asked to submit their financial and technical proposals for the study.
The proposed railway network is expected to cover almost all major bus stops and connect the city with the outskirts, making commuter movement easier and faster, and laying down of 66.1 km of railway track including 27 km along the Ring Road.As depicted in the Map above 5 railway lines will spread over 66.1 Km including 31 stations. There will be 5 lines, first line will cover Kathmandu with outer circle ring road covering 18 stations and other 4 lines touches the inner part of Kathmandu valley. 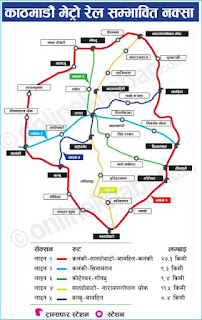